Welcome to The Ultimate Guide to the Women’s Health Market: A Deep Dive into Marketing and Messaging for Women’s Healthcare Technology Businesses.

In this report, you’ll get:

What is the Women’s Health Market (and Why Does it Matter)?

Yet women’s health has been considered a niche market—a subset of healthcare.

It’s time to change that.

Women’s health is much more than just reproduction.

It includes female-specific conditions, women’s biology, and issues around gynecology. A few examples are:

But it’s not just areas that we think of as “women’s health issues.”

To be clear, all health issues are women’s issues because the unique needs of women must be taken into consideration. Why?

First, because women’s bodies have different needs that are just now starting to get the research and attention they deserve.

Scientists and physicians are increasingly recognizing that many diseases and conditions affect women differently than men and that treatments and therapies can differ in both subtle and significant ways.

Second, because women’s needs change at all phases of their lives.

To make it even more challenging (and important) general health conditions affect women differently for reasons that aren’t always biological or understood. For example:

It seems strange to include a section on the history of women’s healthcare as a distinct market because there have always been women—and they’ve always needed healthcare.

That said, let’s take a look at a few milestones in women’s health over the last 100 years.

So What’s Going on in FemTech?

The women’s health market has traditionally been lumped into general health marketing with an occasional nod to alternative health topics. But recently a new industry has emerged—FemTech.

FemTech is made up of products that blend women’s health with modern technology, including apps. And until now, it has been virtually ignored.

Why is the market growing so quickly? Studies show that women are:

1- The hidden cost of being a woman. The bottom line cost to women is higher than their male counterparts for nearly everything because of the gender wage gap. If you make less money for the same job, your money doesn’t go as far. And yet, women spend more money on healthcare for themselves and their families than men.

2- The overt cost of being a woman. Until recently, women were actually charged more for the same conditions as men, while receiving identical treatments! Why? Because they were women. No other reason.

There is also a “hidden market” that’s not reflected above—the rest of the family.

Women are often the primary researchers and providers of health resources for the whole family. So these numbers don’t necessarily reflect women looking for solutions on behalf of their mothers, daughters, etc.

Given the size of the women’s health market and the degree to which it’s underserved, it’s time to take a closer look at providing FemTech solutions to this important segment of the population.

The technology happening in the women’s health market is so cool. And it will only get better as more people take an interest in the industry and apply their considerable talents to take care of the women in our lives.

Here are just a few examples: 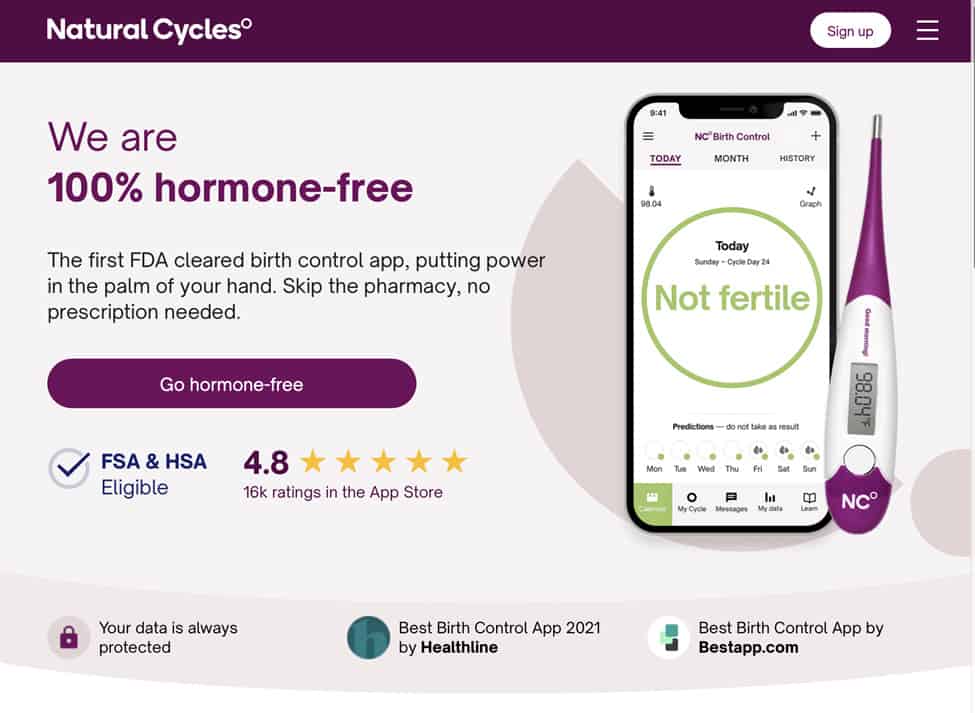 Natural Cycles is an FDA-approved app for birth control.

Think about it: an app as a medical device.

If you’re from the old days of tracking temperature and cycles with paper and pencil (and worrying whether you’ve done it right or not), then you know just how amazing this is.

Again, another amazing app. I breastfed my five children during a time when women had access to friends, mothers, sisters… a whole community of women to answer your questions and make sure things go well for you and your baby.

But now, women are more isolated. And in many places, it’s a social taboo to feed your baby in public. So how are you going to get the help you need to provide the optimal nutrition for your baby?

That’s where LactApp comes in. Awesome.

Here it is again… more technology specifically for women’s legitimate and important health needs. I doubt men understand how much of a woman’s life is consumed by the medical needs of her cycle. (Hint: It’s 3 weeks out of every month, with one week off, if you’re lucky. Think about it.)

This app is so good that my daughters use it. And if you read earlier about the Cascade Effect I was talking about, then you’re now seeing the cascade happening in real life. My daughter found the app and recommended it to her sisters. Suddenly, a whole tribe of followers sprung up in just my family alone. So if you’re wondering if women’s markets are leveraged, rest assured they are. 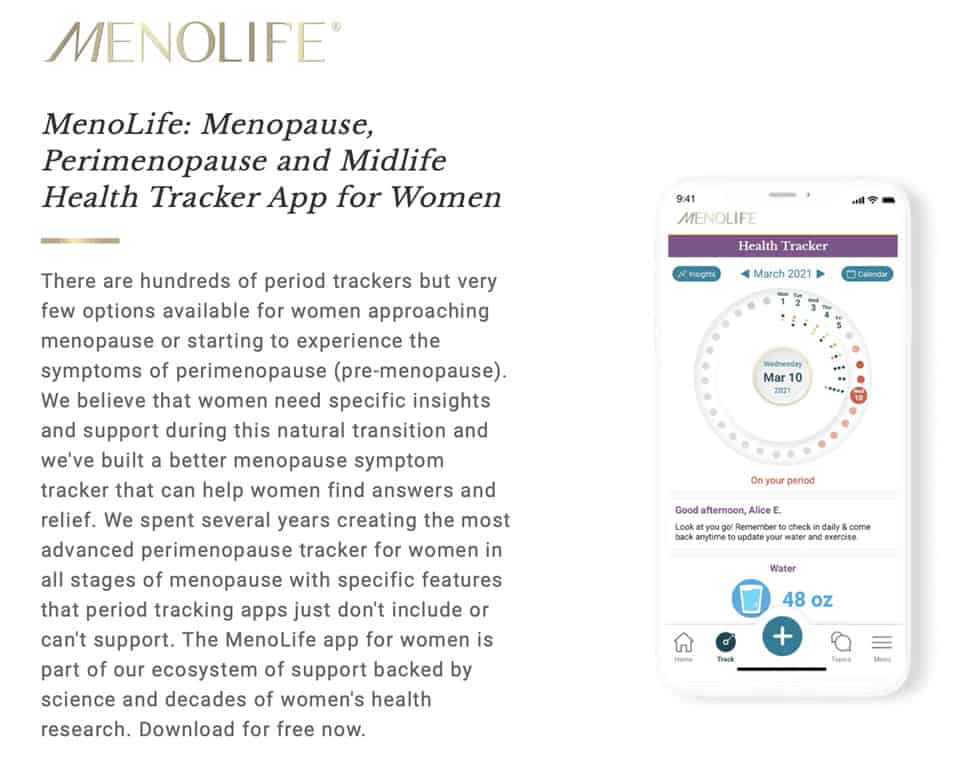 Here’s a great app in the wildly underserved menopause market. Just so you know, menopause isn’t a disease to be cured. It’s a stage of life. And most women will live post-menopause years longer than they ever did during their fertile years.

During these years, women will take on vital leadership roles in their businesses and families. They deserve to have access to tools that make their lives better. This app does exactly that. 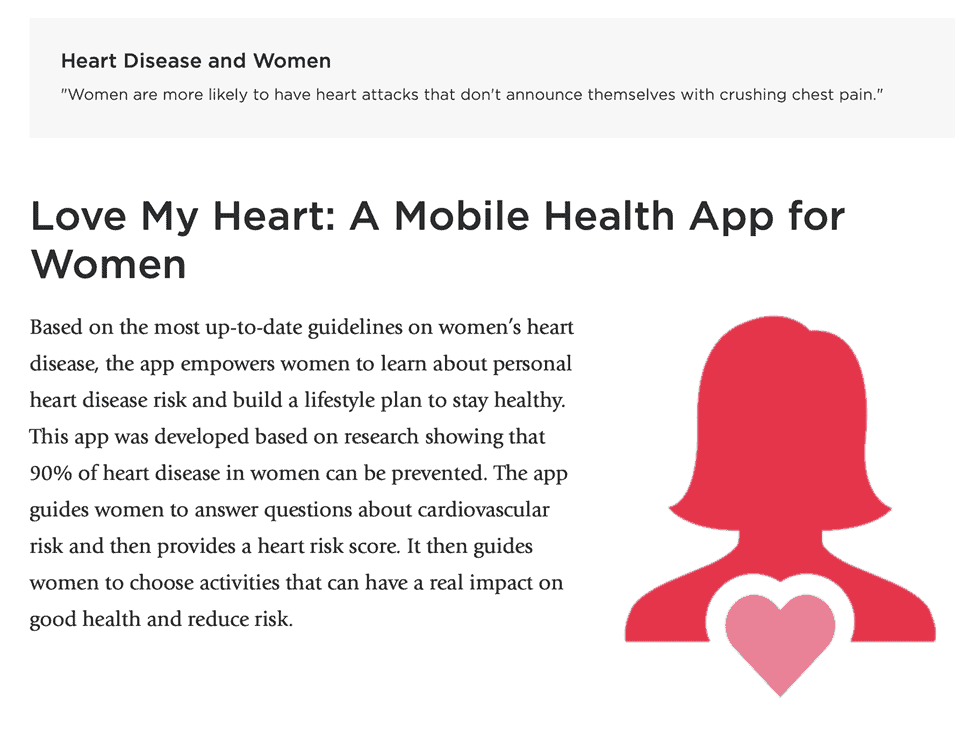 And just for fun, here’s one more from Columbia University. Women’s heart health symptoms show up differently. And 90% of heart disease can be prevented. So why not give women tools that help them understand their bodies and save their lives?

Even though the women’s health market is underserved, it’s still important to uniquely position your products so you stand out.

In broad strokes, here’s the process I recommend whenever you’re launching or relaunching a product:

Opportunities in FemTech and Where to Start With Your Marketing

So as you can see, the deeper you explore the FemTech market, the more opportunities there are to improve women’s lives.

To put it in marketing parlance, the problems being solved in this industry are “red light” problems—problems that stop a person’s life until a solution is found.

There’s also room in the market to create profitable businesses that provide jobs for the brilliant minds that collaborate on women’s healthcare technology… doctors, researchers, software engineers, product designers, user experience professionals, and a host of other people across a variety of fields who might not normally work together are suddenly on a journey together.

That alone is inspiring.

But to bring women’s healthcare technology to its full potential, it needs the support of marketing and messaging to show women the true and important value of your product.

Where should you start?

My advice is to start with the customer avatar.

Research the way women talk about their problems. Consider what they’re saying… and what goes unsaid. (Sometimes what’s unsaid is the most important part of the conversation.)

From there, build out messaging that resonates and do everything in your power to get your product into women’s hands.

Building out compelling marketing messaging in the women’s health market is tricky because women’s healthcare has a long history of entrenched lack of communication.

It shows up in several ways in women’s lives.

1- Silence. People are often unwilling to talk about women’s bodies and medical needs.

2- Poor vocabulary. There is a pervasive lack of knowledge about what to call various body parts, names of procedures, tools used in a medical setting, and what happens in a doctor’s office.

3- Otherness. There is a generalized belief that women’s bodies are somehow foreign. This locks in the attitude of silence and prevents people from learning the vocabulary that could facilitate conversation.

In the next section, I’ll share tips for how you can reach women with your messaging. But first, let’s consider the overarching principles we’ve discussed so far:

1- Open discussion. The more women’s healthcare needs and products are openly discussed, the safer and healthier women will be.

2- The Cascade Effect. Improved women’s health contributes to stronger, healthier societies because women are often the caretakers of children and the elderly of all genders.

3- Technology. Technology advances in women’s healthcare have accelerated in the past few years. Giving women access to tech-enabled solutions that focus on their health needs will improve the quality of their lives.

Given that there is a general lack of communication in the women’s healthcare space, it’s easy to say the wrong thing and turn off or offend women who might be ideal for your product.

From my experience as a marketer, woman over 40, and mother of five (including four daughters), here are 9 tips that will help:

In this report, we took a look at the women’s health market from 100 years ago to today.

We saw what’s happening in the FemTech market and why it’s so important to get healthcare technology into the hands of women.

And I shared proven marketing and messaging strategies for bringing your products to market.

Here are two steps I recommend you take next:

1- Reach out. If you’d like help strategizing your brand messaging, web copy, marketing funnels, or advertising, you can email me at melanie@placemastery.com.

2- Join the list. If you’d like to join my email list where I talk about FemTech and business strategy for women in business, please enter your name and email below.

When you sign up, you’ll get the Momentum Builder Workbook—a free self-assessment tool that shows you 7 ways to build sustainable momentum in your business and the best way to uniquely position your product for accelerated growth.

It’s the 30,000-foot-view-slash-lifeline I wish I’d had when I started my life over again as a business woman and single mother of five.

Appendix: Helpful Resources for Businesses in the Women’s Health Market

In this appendix, you’ll find helpful resources about the women’s healthcare market and how to reach women who could benefit from your products.

Melanie Warren is the founder of Place Mastery–a digital marketing consulting firm for women-owned businesses and entrepreneurs whose products improve the quality of women’s lives.

Over the last 8 years, she has worked with clients ranging from solopreneurs to major media brands to increase profits by building brands that attract, engage, and retain high lifetime-value customers.

In addition to high-level consulting, she has worked directly in her clients’ businesses to create unique and valuable experiences for their customers.

She has created, consulted and co-led over 500 educational, invitational, and sales webinars.

She has sold over $3 million in high-ticket, in-person seminars (across 2 years) using her unique “teach to sell” approach to understanding people and what makes them tick.

She has shared the professional speaking stage with:

She is also the author of The 9 Buyers System: How to Increase Sales by Answering Your Customer’s 9 Hidden Questions, The Place Mastery Method: How to Build a Thriving Online Community in 12 Easy Steps, and a children’s book: Princess Audria’s Paintbrush.