Once upon a time, there were “pulp” magazines. Pulps were weekly fiction magazines printed on rough newsprint and sold for 10 cents an issue.

The paper was so rough you could see pieces of wood in the paper, and it wasn’t uncommon to get splinters from turning the pages.

And yet, these magazines had a deep commitment to printing stories so compelling that it didn’t matter how poor the reading experience was.

Pulps competed against “glossies.” Glossies were magazines printed on smooth white paper that had a bit of sheen to it. Hence the name. 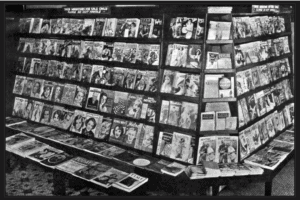 Glossy magazines sold for 25 cents and more. But at that price, only wealthier people could afford them.

The 10-cent price gave publishers access to a wider reading audience that remained strong through the Great Depression, even with many people out of work.

Millions and millions of copies were sold.

In fact, wood pulps didn’t go out of style until the 1950s when television permanently changed the way people consumed content.

So what do these old, mostly-forgotten magazines have to do with marketing and advertising today?

So far in this article I’ve already touched on the idea that story trumps medium.

I also mentioned another truth which at first glance seems to be the flip side of the first takeaway: A new medium can change everything.

But here’s another interesting thing about pulps that most people don’t know.

At the front and back of each issue, pulps had advertisements. Nothing new there, however…

They had to be special ads that were at least as interesting as the stories themselves. They had to grab the reader’s attention and hold on for dear life.

These ads were competing against tales of aliens, western shoot-em-ups, and damsels in distress. The ads had to be AMAZING.

And that’s why it’s worth studying the ads today.

Would You Buy From This Ad?

Check this ad out for example. It’s for Listerine. A product that’s still sold today.

But this ad appeared in a February 1932 issue of Astounding Stories.

It was an expensive full-page ad, so it needed to pull its weight.

Now keep in mind that this ad is 90 years old, so some of these claims may be illegal or frowned upon today. But let’s look deeper to see some of the tools and inspiration that we can still use.

*gets out her direct response advertising spy glass*

Story-Driven Headline That Twists the Knife

Ouch. That’s no way to talk to a friend, but it’s certainly an eye-catching bit of dialogue. So it did everything it was supposed to do… namely it:

1- Got the reader’s attention

2- Got the reader to read the next sentence, or look at the next image… preferably both.

The Picture Tells the Story 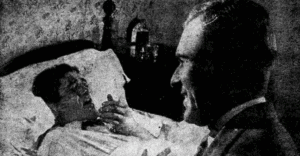 In the picture, you see a smiling, well-dressed man who seems like a nice enough guy. He’s tending to his buddy who seems to be under the weather.

(Or maybe he’s chuckling at his friend, “the chump.”)

You gotta admit, this is a compelling image. Even if you don’t like the smiling guy who’s insulting his sick friend, you certainly feel *something* looking at the picture.

Why would an advertiser use an image that could possibly upset readers?

It’s not just a person coughing, it’s an entire scene of a relationship.

It also shows a clear contrast between life with Listerine and life without it. What’s the implied message?

“Using Listerine will give you health, wealth, and happiness. Skip this ad at your own risk.”

Now the reader is hooked, so what does the ad say next?

This subhead is great.

Here are 9 sophisticated persuasion techniques embedded in that simple subheading:

The next thing you see is the body copy. Let’s take a look…

The first 6 words are worth breaking down as their own masterclass.

“Now people are beginning to realize…”

This is everything a compelling opening line should be.

It has drama. Believability. And a hint of intrigue.

Let’s break it down.

When is this interesting thing happening? Now.

What’s going on? It’s the beginning of a whole new world.

Why didn’t the reader know about it before? It’s not your fault. People are waking up to this idea right now.

Based on that opening phrase, would you read the rest of the ad?

Most people would. Most likely, you’d at least skim the smaller subheadlines and remember the image.

It’s almost impossible to get the idea of Listerine out of your head once you’ve seen this ad.

In the next article, I’ll take you through the body copy and see what we can discover there. In the meantime, check out the full ad below and see what else catches your eye. 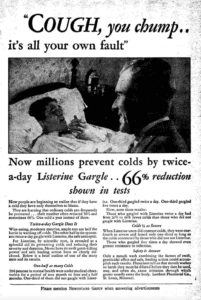